Warning: count(): Parameter must be an array or an object that implements Countable in /home/customer/www/sunisthefuture.net/public_html/wp-content/plugins/easy-adsenser/easy-adsenser.php on line 101
 Veolia World Solar Challenge of 2011-Open Ceremony in Front of Parliament House at Darwin, Australia | Sun Is The Future

If you are in favor of renewable,  clean, or solar energy, please sign this petition for FIT/CLEAN Program, accessible at http://sunisthefuture.net/?page_id=1065 Thank you very much.
http://www.youtube.com/watch?v=MibIzEE-xOE

Now, here is the report you’ve been waiting for, the first day of the Veolia World Solar Challenge of 2011, Sunday, October 16, 2011.  Some of the thirty-seven teams started to arrive in front of the Parliament House in Darwin, Australia, as early as 5:30 A.M.  Even though official post indicated that the race is expected to begin at 10:00 A.M., I found out from the WSC (World Solar Challenge) few days ahead that individual solar cars would most likely be taking off around 8:30 A.M.  So  hubby Mike and I got up around 6:00 A.M. and dragged our camera and tripod in front of the Parliament House by 7:00 A.M.  The following footage I uploaded to youtube actually started around 8:30 A.M.  as Mr. Chris Selwood (speaker in the footage who is also the leader and rightful owner to this event) did a wonderful job introducing each and every one of  these scifi-ish entry as they glided by him on the way to the starting point.

In this open ceremony footage, the person waiving the flag near the starting point is Minster Gerry McCarthy (Minister of Transport of Northern Territory of Australia). This is such a friendly competition that one can sense that the crowd is rooting for each and every one of the entrants to be able to complete their journey of passing through a variety of different ecosystems (from deserts to temperate forests and tropical climates) while reaching for the sun’s energy.  As we’ve discovered the day before during another interview with the Singapore’s Nanyang Technologcial University,http://www.youtube.com/watch?v=orKZfIGojiA, the whole process of scrutineering mainly focused on the safety of all involved and the judges tried their best to help all entries to meet the standard.

These thirty-seven teams of solar cars have come from twenty countries.  To see a few of them below: 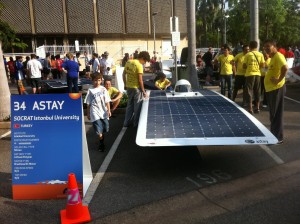 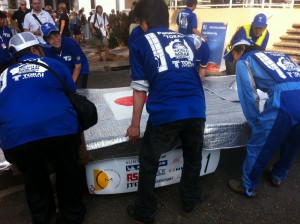 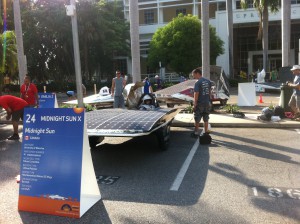 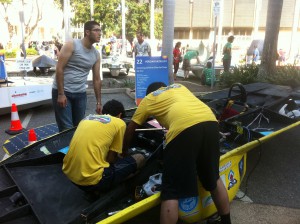 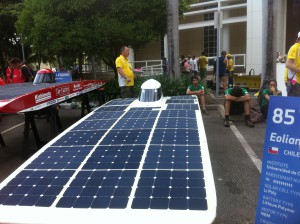 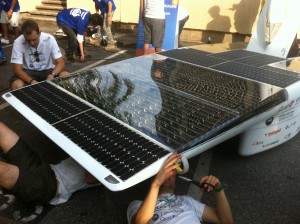 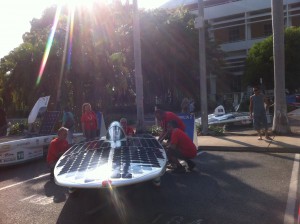 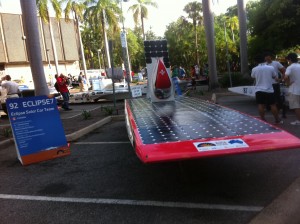 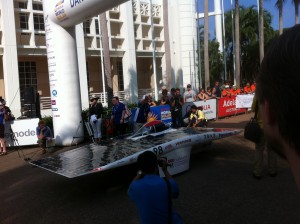 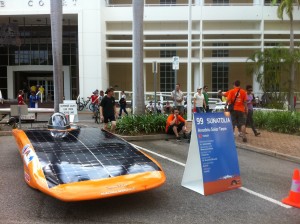 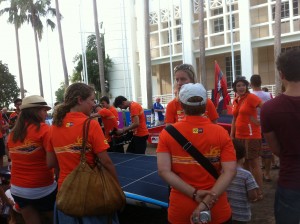 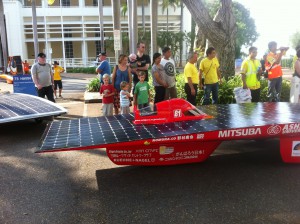 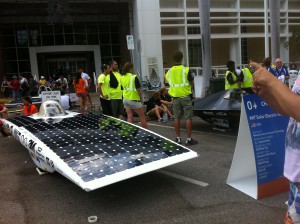 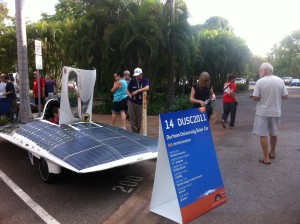 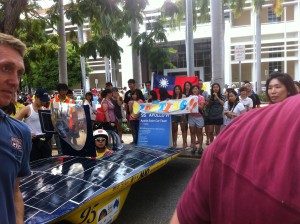 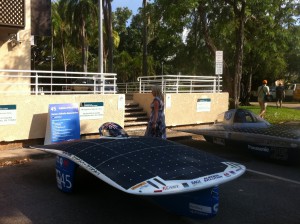 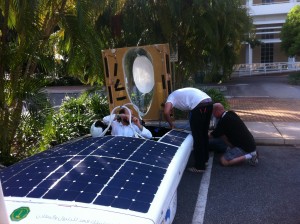 Science plays an important part of the WSC.  A team’s success depends on the engineering of the car and the efficiency of its solar cells.  Each team has a large support crew and up to four drivers.  Each driver can spend between four and six hours at a time behind the wheel and driver changes are strategically planned at control stops (extra stops may cost time and are discouraged). The fact that WSC teams are only suppose to compete between 8:00 A.M. and 5:00P.M. and then set up camp wherever they might be makes WSC more of an adventurous race rather than a competitive  race, providing unique opportunity for participants to experience the outback Australia.

Some unique features of  WSC are: The driver may experience cockpit temperatures up to 50 degrees C, which requires a slow and steady intake of cold water to prevent dehydration and regulate body temperature;they may also have to regularly counter-steer against strong side winds, especially in South Australia; WSC participants are only allowed to store a very small amount of energy in batteries, meaning that they are heavily reliant on the sun and that the aerodynamics of the car is more important than battery size.

All solar cars are monitored by GPS (global positioning system) during the WSC so their progress can be tracked and officials can ensure that no rule is broken.  GPS uses satellites to provide location information by sending frequent messages to these satellites.  So organizers can estimate their average speed and make sure it was below the limit (these solar cars need to abide by the speed limit of the road).  To overcome the obstacle of the fact that many parts of the journey are without mobile phone reception, the GPS relies on marine communication satellites over the ocean, which can pick up the signal of the cars throughout the entire challenge of WSC.

More photos and videos are coming….