The Swiss Solar Impulse 2 (solar airplane) and French solar rooftops have inspired me to look toward other forms of transport and surface areas to be powered by or used to generate solar energy. It’s fantastic that there had been quite a few interesting progress made in the area of trains. Case in point, the high speed train powered by solar energy, in the video below, was in service back in 2011 in Belgium:

The rail line between Antwerp and Amsterdam (about 80 miles) in Belgium was the first solar paneled train tunnel (about 2.2 mile long tunnel) in Europe that utilized 16,000 solar panels (costed $22 million for installation) to power the railway infrastructure and trains back in June (started on June 14), of 2011, bringing clean energy to trains. This Solar Tunnel project is expected to generate 3.3 megawatts of energy (equivalent of the average annual electricity consumption for 4,000 trains or about 1,000 homes). The project partner Enfinity also indicated that the tunnel is decreasing CO2 emissions by 2,400 tons annually. “It is the perfect way to cut the carbon footprint because the spaces used have no other economic value,” commented by Bart Van Renterghem, Enfinity former UK head. Other collaborators on this project were Belgium rail operator Infrabel and solar construction company Solar Power Systems.  This was a fantastic clean energy project because it is optimizing the previously idled space and once the installation is in place, there is to be no consumption of fuel or coal and at no cost to our environment.

About 4461 miles (or 7179 km) away, India is planning to massively  utilize the solar energy via its state-owned railway systems. With one of the largest railway networks in the world, running about 12,000 trains, 23 million passengers (practically the entire Australian population), and 3 million tonnes of freight daily, much energy is needed.   In 2012, the Indian Railways consumed nearly 3 million kiloliters of diesel oil  and about 14 billion kWh of electricity .  So, India’s railway minister Suresh Prabhakar Prabhu wants to control such a ballooning fuel bill by shifting toward alternative energy sources. Since the Indian Railway System is aiming to have at least 10% of its total energy consumption coming from renewable energy by 2020, the railway minister wants to incorporate more alternative energy sources to power trains. This is first done by solar powered lighting via solar panels mounted on the roofs of the trains. This is now being tested on a non-AC coach on the Rewari–Sitapur passenger train. 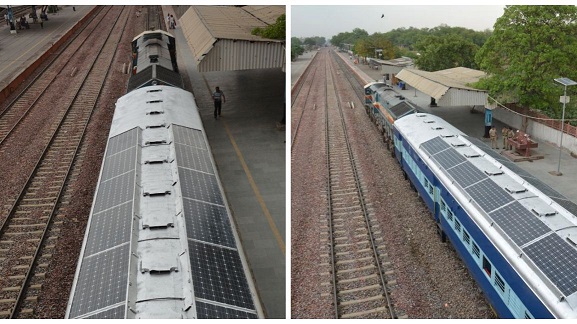 The cost of installing panels on each coach is about Rs3.9 lakh (about $6,084), translating into savings of Rs1.24 lakh (about $1,934) per year, According to The Economic Times of India Times.  In the next few weeks, the Indian Institute of Science, Bengaluru, and the railway coach maker Integral Coach Factory will  be testing the solar  paneled coach under a variety of conditions. Besides the solar powered coach, the Indian Railways will also be building  solar power plants of about 8.8 MW (megawatts) in 200 train stations and some of its office buildings.

Without the common vision and collaborations from policy makers, such ambitious projects would not have existed. In India, it took the echoing  support between India’s prime minister Narendra Modi and railway minister Suresh Prabhakar Prabhu to enable such a solar project to become a reality.  Prime Minister Modi encouraged alternative energy projects by encouraging solar companies from around the world to invest $100 billion to reach its solar power capacity target of 100,000 MW by 2022 (about five times India’s current solar power generation capacity). He was also instrumental behind another ambitious project, World’s First Canal Solar Power Plant in India, in Gujarat, in one of our previous post.

I hope all policy makers and governing bodies will receive the support he/she/they/it need(s) during this critical transitional period in human history, onward and forward toward the renewable/solar energy future! For deep down, within all of our hearts, we know that Solar/Renewable/Clean Energy is the solution/answer to Energy-Pollution-Economic Prosperity-International Conflicts. The sooner we get there, the better it will be for us and our posterity. In our system of democracy, perhaps all of us may be able to help play a part in assisting our policy makers in arriving at the correct decisions or policies quickly.