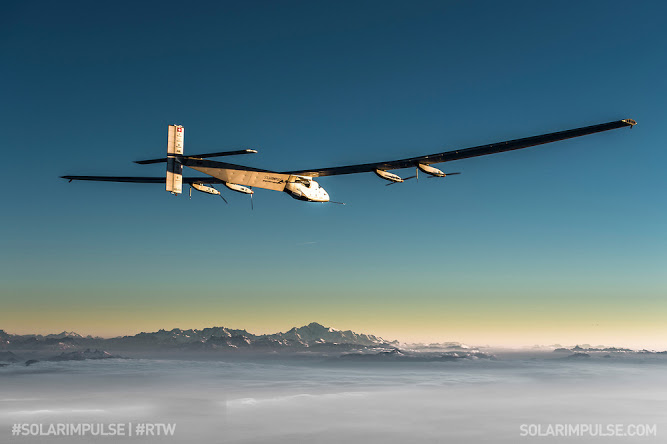 Solar Impulse 2 will be taking the longest solo flight of all time, over the Pacific Ocean, between Nagoya, Japan and Hawaii, this weekend (credit: Solar Impulse)

Time to update our report for Solar Impulse 2, the Solar Powered Plane: it will continue its historic around-the-world flight (that began back in March 9, 2015, from Abu Dhabi, United Arab Emirates) this weekend with the non-stop, four- or five-day flight over the Pacific Ocean between Japan and Hawaii.  This segment of the journey will be the world’s longest solar-powered flight and the longest solo-airplane flight of all time. It will be “the moment of truth” for the Solar Impulse Team on this mission, as pilot Andre Borschberg called it. Please view the videos below, for the motivation behind the construction and flight of Solar Impulse 2 and portions of its flight on this around-the-world mission, below:

The cofounders of Solar Impulse and Solar Impulse 2, Bertrand Piccard and Andre Borschberg, aim to raise awareness of climate change and the importance of using renewable/solar/clean energy.

“The most important thing isn’t to make world records. It is to show what we can do with clean technologies. Clean technologies can reduce CO2 emissions while stimulate economic growth.” Piccard said. “Many of these energy efficient solutions are starting to be commercialized, as they are economically attractive and have real potential to considerably reduce worldwide energy consumption.” Piccard wants to let people know that the technology in the Solar Impulse could be used in cars, houses, and other places. He wants to bring solutions rather than just talk about problems. It is Bertrand Piccard’s life mission to demonstrate to the world that “we can do incredible things with clean and solar technologies.”

Weather permitting, we shall soon see Solar Impulse 2 crossing the Pacific,  from Nagoya, Japan, to Hawaii, on this longest solo flight of all time. Despite difficult weather condition during its seventh leg from Nanjing, China to Honolulu, Hawaii, or its wing damage upon arrival in Japan, Piccard and Borschberg have overcome much obstacles and have been patient and cautious in waiting for a period of four days of good weather condition to take this longest solar powered flight coming up this weekend. 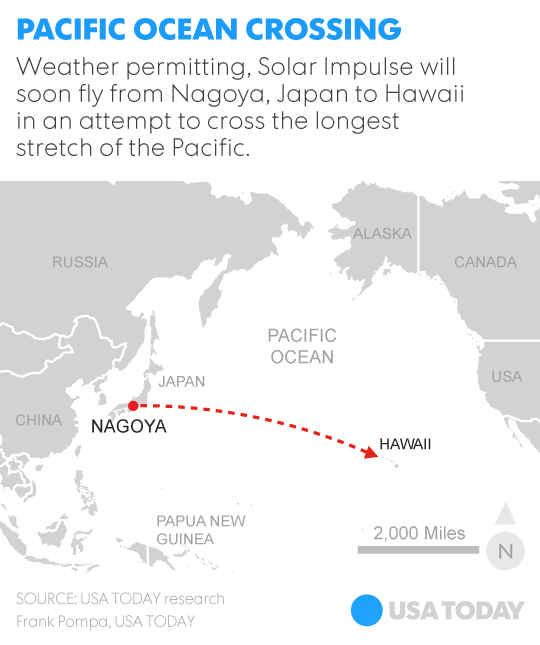 Let us wish these two visionaries, Piccard and Borschberg, and their Solar Impulse Team and family, plenty of sunshine during this upcoming journey crossing the Pacific. The whole planet will be rooting for you!
~have a bright and sunny day~ 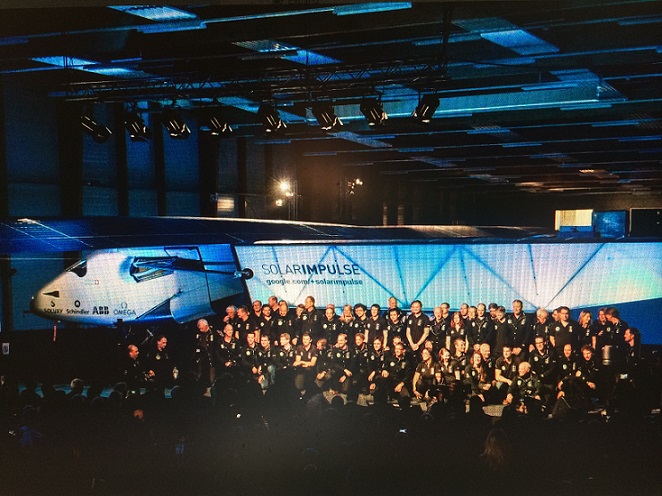 So much needs to be done in order to insure a safe and clean world for our future generations! The new challenges we’re facing in Triple E’s: Energy-Environment-Ecology. Our world truly needs new solutions to reduce the negative impacts of human beings on the delicate balance of nature. As Bertrand Piccard pronounced in the video below, “we need political courage and the pioneering spirit” in order to reach our goal and dream of a clean and sustainable world in the future!

To Bertrand Piccard, Andre Borschberg, rest of the Solar Impulse Team and ABB, or ABB Group,we earthlings and solar enthusiasts from around the world owe a debt of gratitude for such a magnificent accomplishment !

For the official trailers of the presentation of Solar Impulse 2, please view below:

Great News!  Solar Impulse Team just released the news that the global leader in renewables, sustainable transportation, and energy efficiency, the  Switzerland-based ABB, will support Bertrand Piccard and Andre Borschberg in their attempt to fly around the world in their Solar Impulse 2 (HB-SIB) in 2015!!!


The construction of Solar Impulse 2 or HB-SIB started in 2011, incorporated much lessons learned from the previous HB-SIA, but with more spacious cockpit (enabling the pilot to fully recline during flights of 4-6 day duration). It will have an increased payload, isolated electrical circuitry to enable flights in rain, and improved reliability through system redundancy.

So, we can all follow live on www.solarimpulse.com the official presentation of the Round-The-World Solar Airplane, “Solar Impulse 2 (HB-SIB)”. Be sure to ADD  THIS  EVENT  TO  YOUR  GOOGLE  CALENDAR.

Below, are the aircraft data for Solar Impulse 2 (HB-SIB), from wikipedia:

The wingspan of HB-SIB will be 80.0 m (262.5 ft), slightly wider than an Airbus A380, the world’s largest passenger airliner, but unlike the 500-ton A380, the carbon-fibre Solar Impulse will weigh little more than an average automobile. It will feature a larger, pressurized cockpit and advanced avionics to allow for transcontinental and trans-oceanic flights. Supplemental oxygen and various other environmental support systems will allow the pilot to cruise at an altitude of 12,000 metres (39,000 ft). Completion was initially planned for 2013, with a circumnavigation of the globe in 20–25 days in 2014. However, following a structural failure of the main spar during static tests in July 2012, a more likely date for the circumnavigation is 2017. The flight would circle the world in the northern hemisphere, near the equator. Five stops are planned to allow changes of pilots. Each leg of the flight will last three to four days, limited by the physiology of each pilot.

In case you’ve missed some our previous posts on Solar Impulse 1 (HB-SIA), below:

1. Solar Plane-“All that is impossible remains to be achieved.” Jules Verne .

5. Solar Powered Plane, The Solar Impulse Reminds Us That The Ultimate Power Is The SUN .

6. Our Future In: Solar Impulse HB-SIA Across America Mission .

8. Solar Impulse Will Be Taking Off For Its Third Leg Soon .

11.Get Ready To Hangout With The Solar Impulse Team !

13.Solar Impulse Is More Than Just About Solar Plane .

For those of you who want more details about the trials and tribulations and the Unbeatable Spirit of Solar Impulse, be sure to also check out the SolarImpulseChannel at Youtube. and SolarImpulse at Google+.

Multiple events occurred during the last portion of Across America 2013 mission of Solar Impulse (I’d also like to share the video clip on “Across Americaa 2013: Best From San Francisco to Washington”, below :

We appreciate Bertrand and Andre’s perseverance, ability to think outside of the box, and their desire to inspire  many to come up with new solutions for our changing world. Thank you Solar Impulse Team for bringing us this beautiful plane powered by Sunshine and igniting the imagination of the world!

Let’s all take part in making HB-SIB to become a reality! Fellow Solar Enthusiasts and Fellow Earthlings, it is the most tangible vision reflecting the future of our planet. Let’s make sure that it will fly high, unbounded by the old world of fossil fuel! Find out how by clicking on: http://solarimpulse.org/en/join-the-challenge/ and/or  http://solarimpulse.org/en/donate/

any of your comments or suggestions will be welcomed at sunisthefuture@gmail.com

As I’ve promised a day ago, we have the Solar Impulse Hangout In Air via Google Science Fair, during the 4th leg of  Solar Impulse’s Across America mission of 2013, on the way to DC (with pit stop at Cincinnati Municipal Lunken Airport). While the pilot Andre Borschberg is 7000 feet above ground, Bertrand Piccard is on the ground spreading the message of need to promote the pioneering spirit  and exploration.  Bertrand also reminds us the importance of using clean technology during this juncture of human history. Without further delay, here is the video of that Hangout:

some fantastic photos of Solar Impulse

the message carried by Solar Impulse

Join The Challenge (by becoming a Friend, Adventurer, Innovator, Explorer, Pioneer) along side of The Solar Impulse Team

It is mostly due to the energy and optimism of pioneers such as Bertrand Piccard and Andre Borschberg that we have been able to  see the solar industry reaching its maturity during this past decade. We are thankful that there are people such as Bertrand, Andre, and the Solar Impulse Team to have brought forth a futuristic dream into  reality. Here in USA, let’s join the challenge in taking part in completing their next project of flying in a solar plane around the world in HB-SIB. Join the challenge by becoming a Friend, Adventurer, Innovator, Explorer, or Pioneer of Solar Impulse!